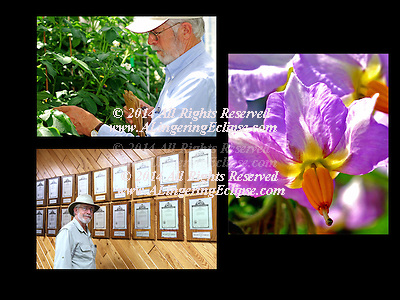 Robert W. Hoopes, Ph.D. in his greenhouse bagging pollinated potato seed balls in his variety development program at Frito-Lay Research facility in WI where he has worked since 1987 developing through a hybridization breeding program superior potatoes in flavor, color and disease resistance. His varieties are gorwn all over the world for Pepsi potato chips. Dr. Hoopes holds more potato patents and potato variety protections than anyone in the world. He received his Ph.D. in Plant Breeding and Plant Pathology from Cornell University and during his career Dr. Hoopes has conducted potato germplasm expeditions during which he found 3 new species, one of which was named after him by the taxonomist, Jack Hawkes of Birmingham UK. It has a deeply pigmented blue / purple flower and is named, Solanum Hoopesii and is archived at the USDA plant repository along with his 300+ expedition accessions. A Potato Flower in Dramatic Light, Ready for Pollination, Anthers & Stamen, Petals & Foliage.
© 2010 Margaret M. Savino traveler4photos@yahoo.com